A Tribute to the late great Bella Emberg

On behalf of the Plaza Trust, we are sorry to learn of the passing of Bella Emberg at the age of 80.  Many Plaza followers will remember that she starred in the third of our Christmas pantomimes after the Plaza reopened, which was the 2002-03 production of ‘Jack and the Beanstalk’.  Bella played the fairy alongside Martin Hancock as Simple Simon.  The panto cast that year also included Kate Baines as the princess, Lisa Williams in the ‘principal boy’ role and Mark Chatterton as dame. 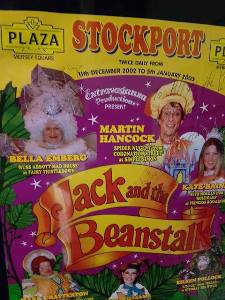 The Plaza was fairly newly reopened then, we were pioneers in bringing life back into her, and our professional team of management staff and the building’s fabulous art deco restoration were some way into the future, so it was ‘hands on’ for the early team of trustees like myself.  I remember taking a morning off work to give Bella a lift from Granada Studios in Manchester in the full regalia of her wonderful fairy costume – just one of the many fabulous creations we have seen from Extravaganza Productions at every panto season!  In my rather small car, the dimensions of her spectacular fairy skirt made changing gear quite a feat, I can tell you! 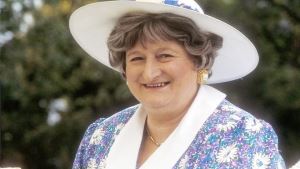 Many of the news reports have said how unassuming and gentle a personality Bella was offstage, giving little clue to her amazing comedy talent in front of the spotlight.  That was our experience too and she was very easy to get to know and work with, but as a funny lady, Bella was like gold dust in the entertainment world where for some reason they have been much rarer than the men.  So in her own way, Bella’s talent put her in the great tradition of ladies like Gracie Fields, Hattie Jacques and Margaret Dumont who used to appear with the Marx Brothers.

We remember her with great affection and are sorry she has gone. But how good to know she was filming almost to the very end of her life and that we can see her wonderful talent in action one more time when the Sky One comedy ‘In the Long Run’ comes out later this year.  And we will never forget her own special page in the Plaza’s story – glowing memories of a truly funny lady.