Phil Mealey announced to play ‘Baron Hardup’ in Cinderella…oh yes he is!

Stockport’s very own star of stage and screen PHIL MEALEY is to take to the stage as ‘Baron Hardup’ this Christmas alongside Cheryl Fergison and full supporting cast in the sensational family Pantomime: CINDERELLA

In the early 1990s Phil appeared regularly on South Manchester radio station KFM alongside Caroline Aherne, Craig Cash, Terry Christian and Jon Ronson after which he went on to appear on Radio 1 alongside Mark Radcliffe in his ‘Mark and Lard’ show for which he wrote and performed comedy sketches. 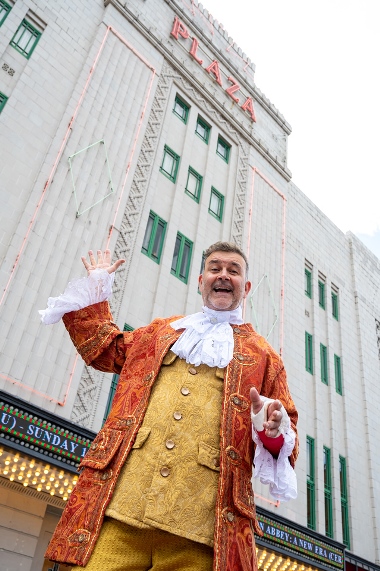 Along with a host of work alongside Craig Cash, Steve Coogan and Bernard Hill, a National Theatre and Stadium Tour of ‘Early Doors Live’ which won the Manchester Evening News Best Theatre Production 2020, Phil has appeared regularly on BBC Radio Manchester and is delighted to be returning to his home town and The Plaza which holds many special memories including a poignant link for him with his Uncle Horace who was a ‘Friend of The Plaza’ and generously included the venue within his will when he passed away, bequeathing funds that paid for the creation of the tableau curtains that have been seen by the thousands of supporters of The Plaza who have been to see Shows, Events, Films and of course Pantomimes at The Plaza over the years….